Despite being on Rust’s compiler team, I have never attended a RustConf – Rust’s flagship yearly conference – so I jumped at the chance to attend this years in Portland, Oregon on behalf of Huawei’s Trusted Programming Lab. Rust is an exciting new systems programming language that combines the speed and control of low-level languages like C and C++ with the expressivity and safety of higher-level languages, making it a perfect choice for Huawei. Huawei is a founding platinum member of the Rust Foundation and our Trusted Programming lab contributes to the project and supports various members of the Rust project from the compiler, library and developer tools teams (including me!). 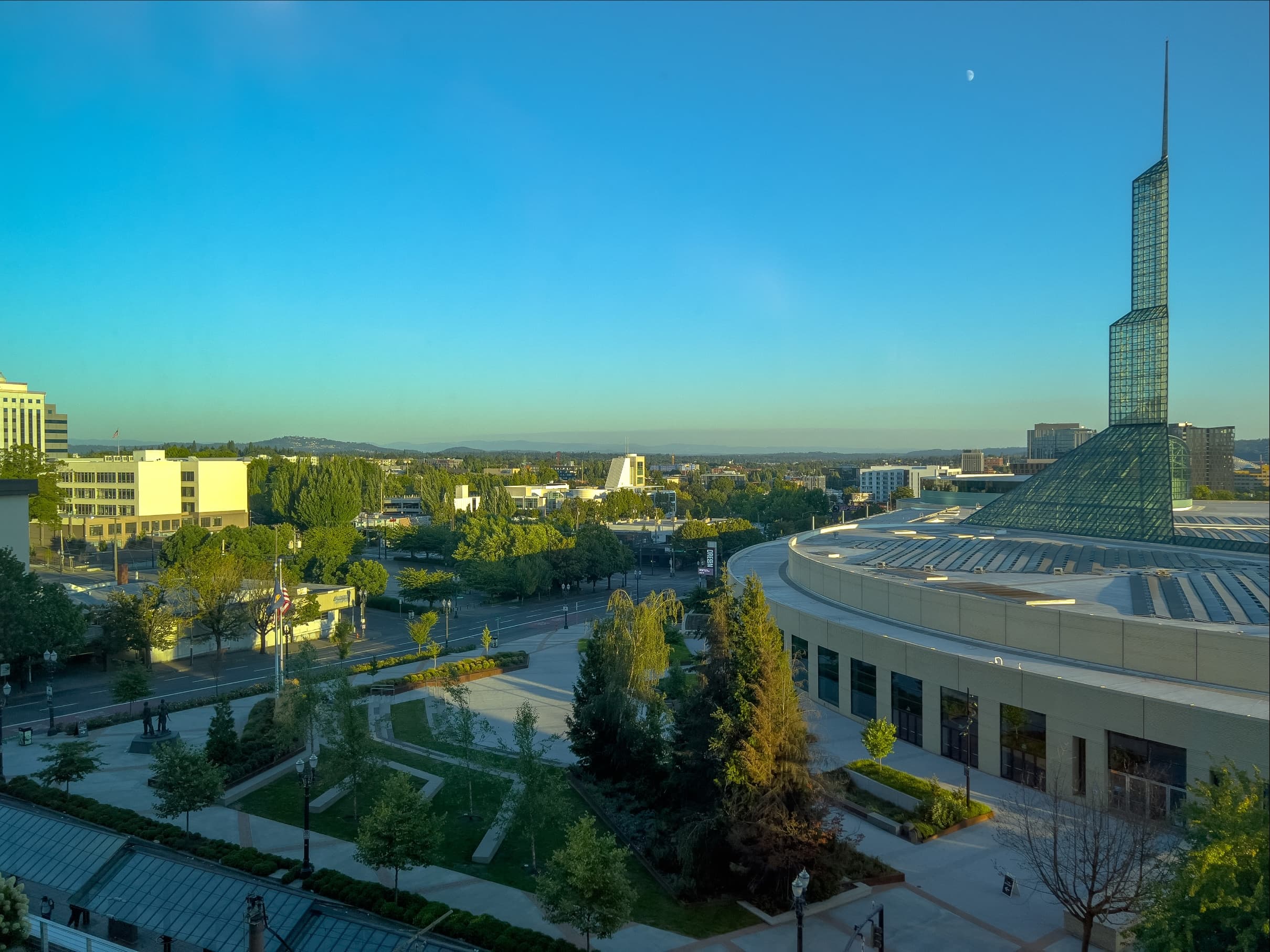 It started for me on the day before the conference itself, with the Rust Foundation’s “RustConf Happy Hour (and a half)”, a drinks and canapes reception for conference attendees to meet each other. One of the exciting parts of attending any Rust event is the opportunity to meet with other contributors that I’ve worked with for years but never had the chance to meet in person – particularly as the pandemic has made “All Hands” events for contributors impractical in the last few years - a particular highlight was meeting with other contributors to the diagnostic translation effort that I’m leading (contributions welcome!).

Another of the exciting aspects of attending RustConf was the opportunity to meet up with the Rust team at Futurewei, which is a Silver member of the Rust Foundation and supports members of the Rust compiler, language, cargo and library teams. I regularly coordinate with the team at Futurewei and we support each other’s upstream work to better serve the Rust community. Being in different continents, we don’t often have the opportunity to meet in person, so it was great to finally meet them all and they were very gracious hosts. 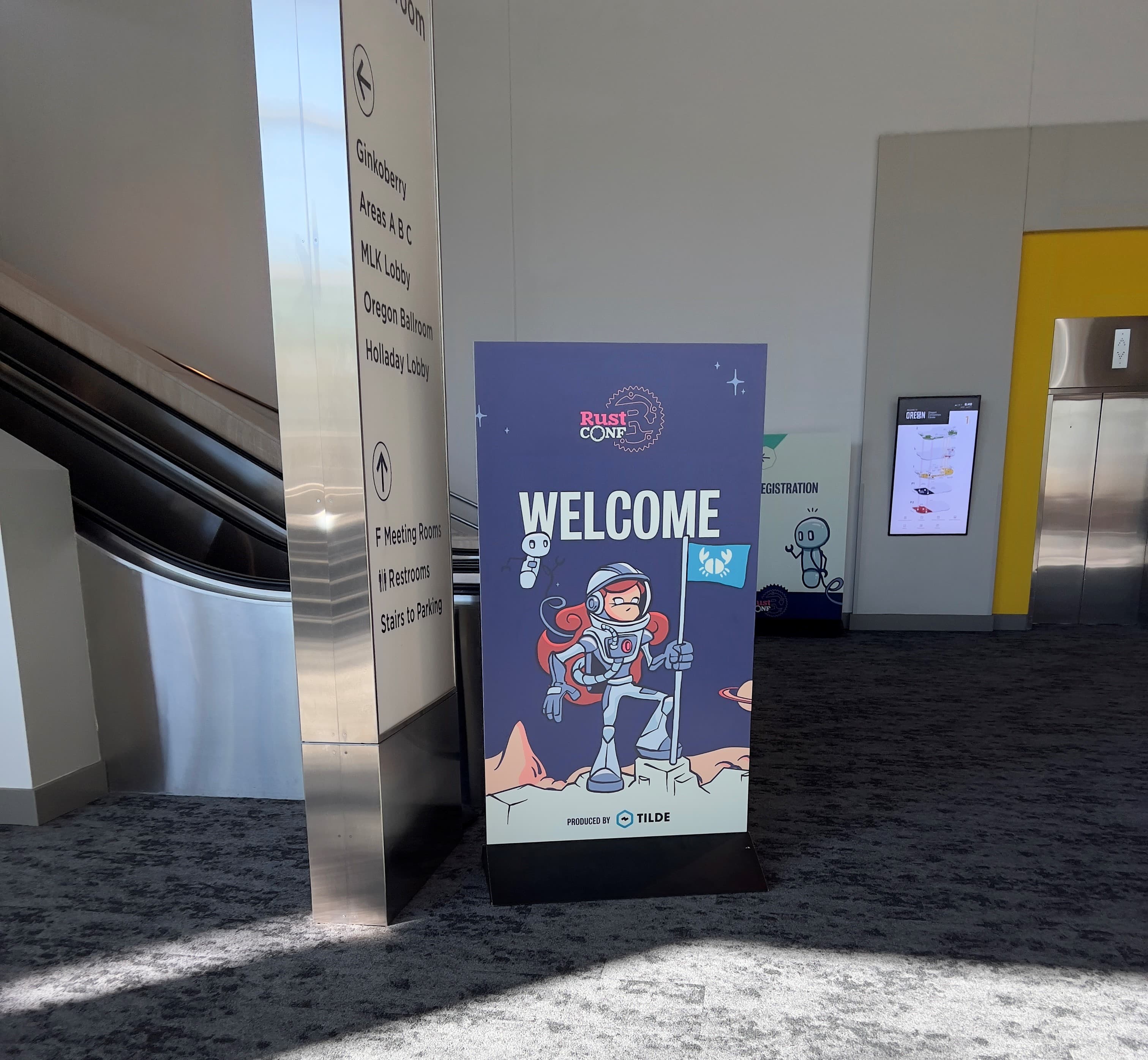 RustConf started with the two opening keynotes by Josh Triplett and Tyler Mandry. Josh is on the Rust team at Futurewei and co-leads the Rust language team, and Tyler is on the Fuchsia team at Google and is on the Rust compiler team. Josh spoke about the importance of the project’s processes to its success and took the audience on a journey through some of Rust’s history and how those processes contributed to the development of some of Rust’s most recognizable features (such as the “?” operator). It perfectly encapsulated how we strike a balance between providing a stable foundation to build upon while still evolving – it’s a must-watch talk to understand the Rust project. Tyler unpacked the soul of Rust, the values that underpin everything we do – openness and inclusion – and how we can sustain that soul into the future. 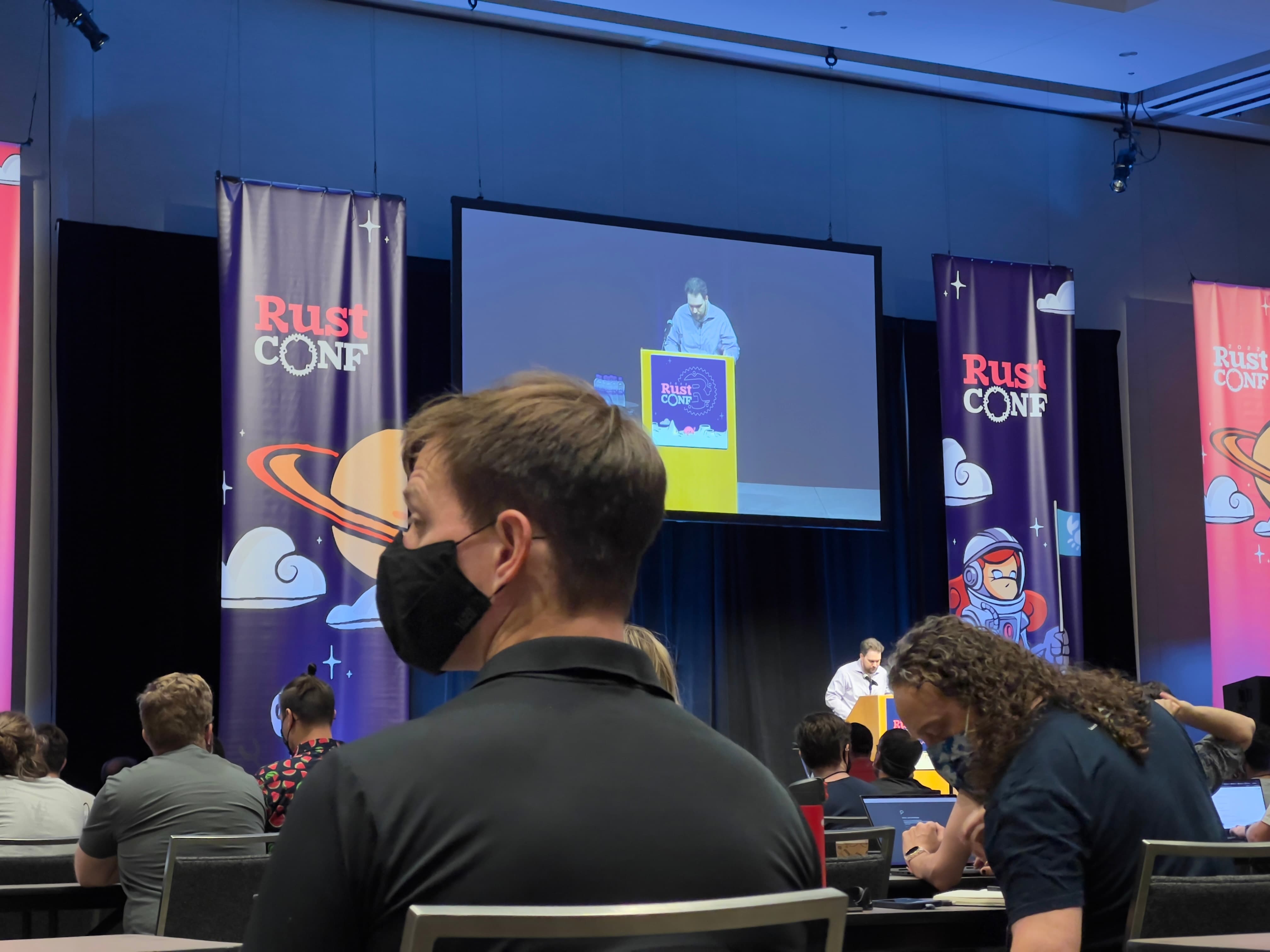 There were lots of great talks at the conference. A standout talk for me was Iryna Shestak’s talk about writing a GraphQL compiler in Rust. Iryna’s presentation had a striking visual style which was very engaging and it was awesome to see how some of the compiler technologies from the Rust compiler - such as salsa, which is inspired by the Rust compiler’s query system - and rust-analyzer are being used in other compiler projects that are very different from those in which they were created. Of course, I’d be remiss if I didn’t also recommend Joshua Nelson’s excellent introduction to the Rust compiler’s bootstrapping process, and Michael Gattozzi’s weird expressions and where to find them.

I was particularly impressed by Julie Wang’s closing keynote on the use of Rust at Parallel Systems. They are building fully autonomous electric freight trains and their entire tech stack is in Rust. Not only did the talk have lots of really very cool videos of autonomous trains, it was also an great example of the ways that Rust’s type system can be used to provide compile-time guarantees. I don’t always have a lot of time to see the really exciting things that people are building with Rust, so this talk was fantastic for that. 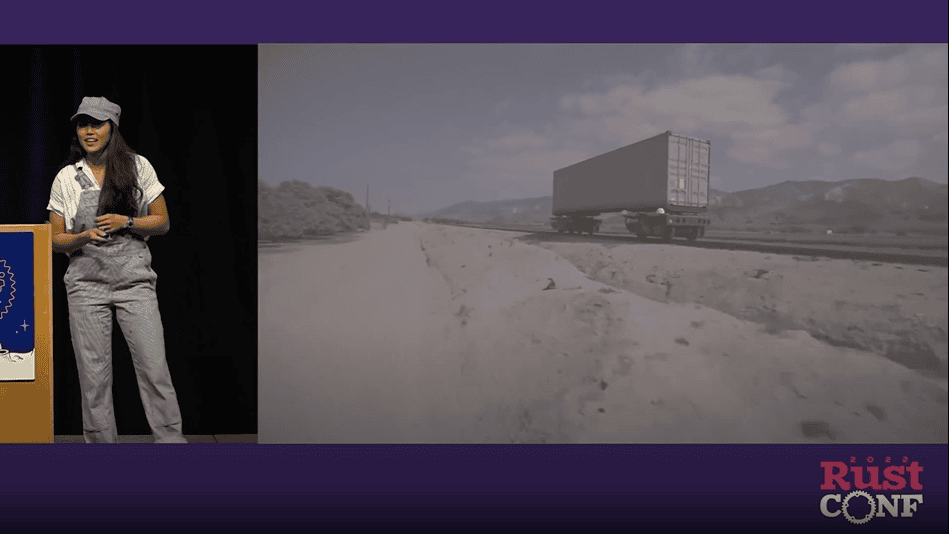 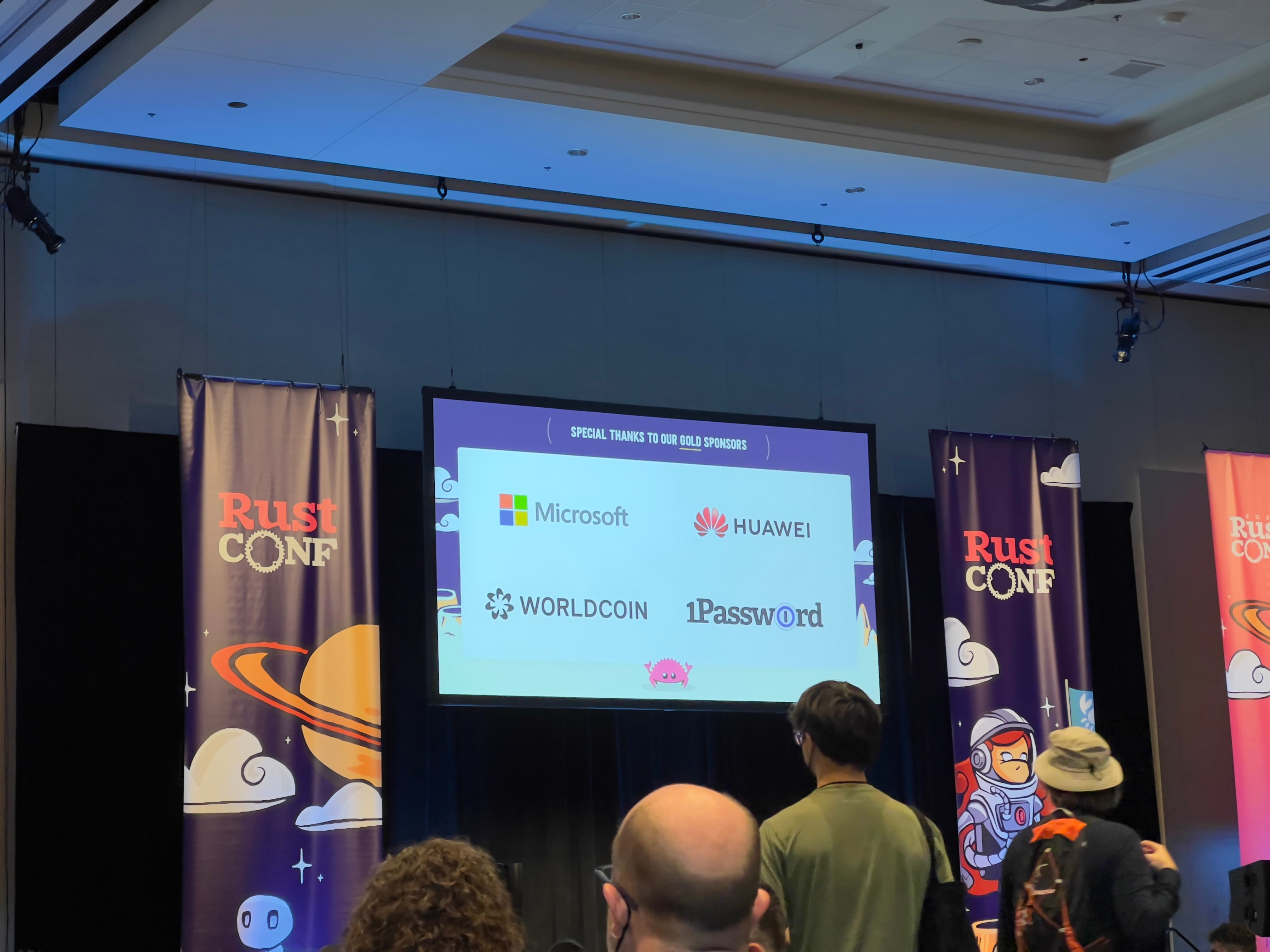 On the day following the conference, the Rust Project organized a “RustConf PostConf UnConf”, an unconference-style event for users and implementors of the language to discuss the project’s development. This was my first unconference, and it was an interesting experience. An unconference is split into multiple sessions – we had six slots, forty-five minutes in the morning and half an hour in the afternoon, with three sessions in each slot – and it starts with everyone having the opportunity to propose a topic that they would like to facilitate a discussion around. Sessions varied from “Writing about Rust” to “Making rustc faster”, from “High-throughput proxies” to “Bringing Rust to academia and learning”, and even “Getting it right by doing it wrong”. 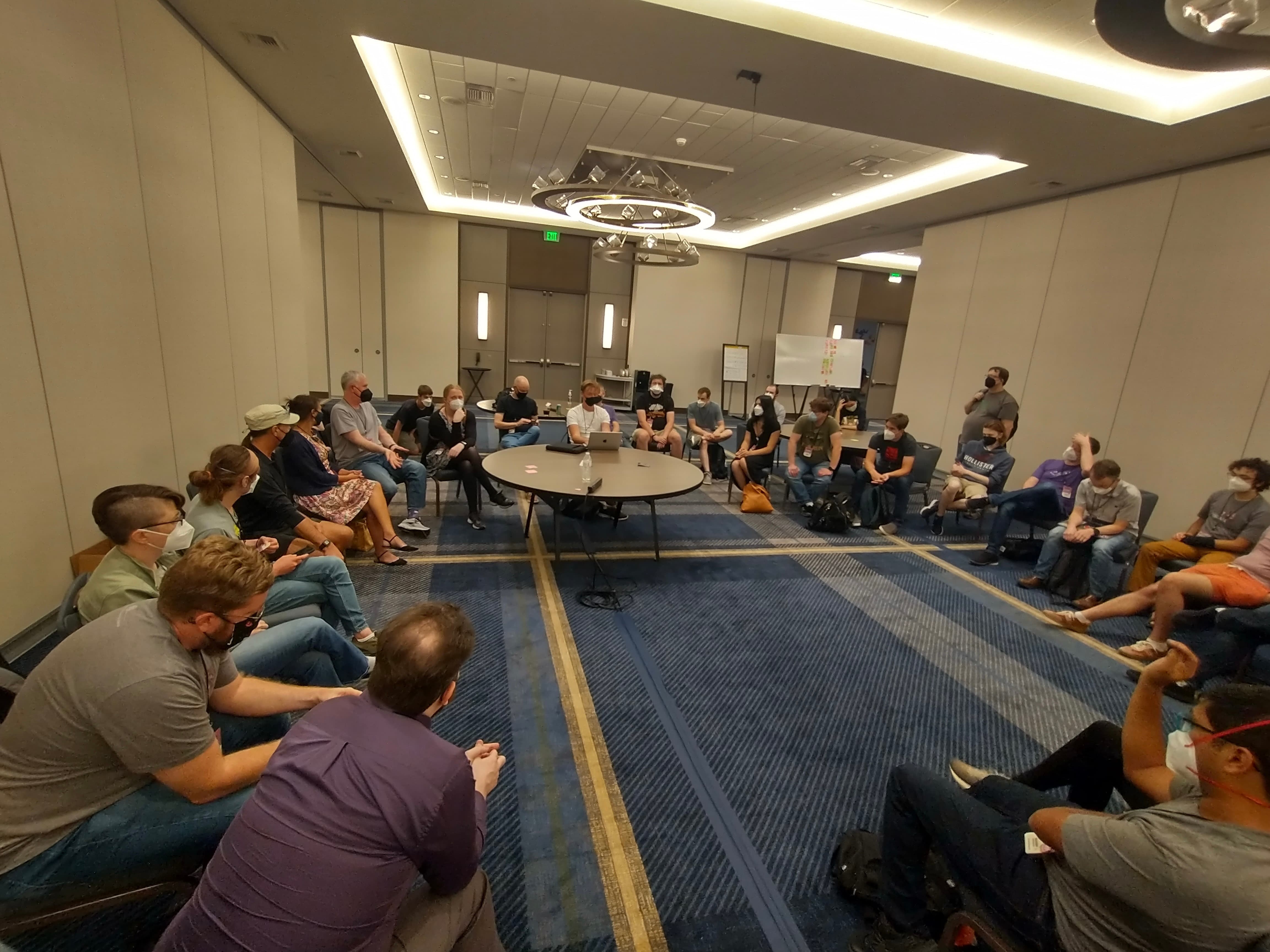 There were lots of interesting discussions at the unconference. As a member of the compiler team, I particularly enjoyed Nicholas Nethercote’s session on “Making rustc faster”. Nicholas is on the Rust team at Futurewei and is the Rust compiler team’s expert on compiler performance. During the session, we brainstormed various avenues for investigation that could lead to improvements in compiler performance. While our first unconference was undoubtably a successful experiment, I felt that it would be better in years to come if it focused on topics around the usage of Rust, topics about improving the language and tooling were interesting (particularly to me!) but would have benefitted from having all of the relevant experts in the room, which wasn’t always the case. 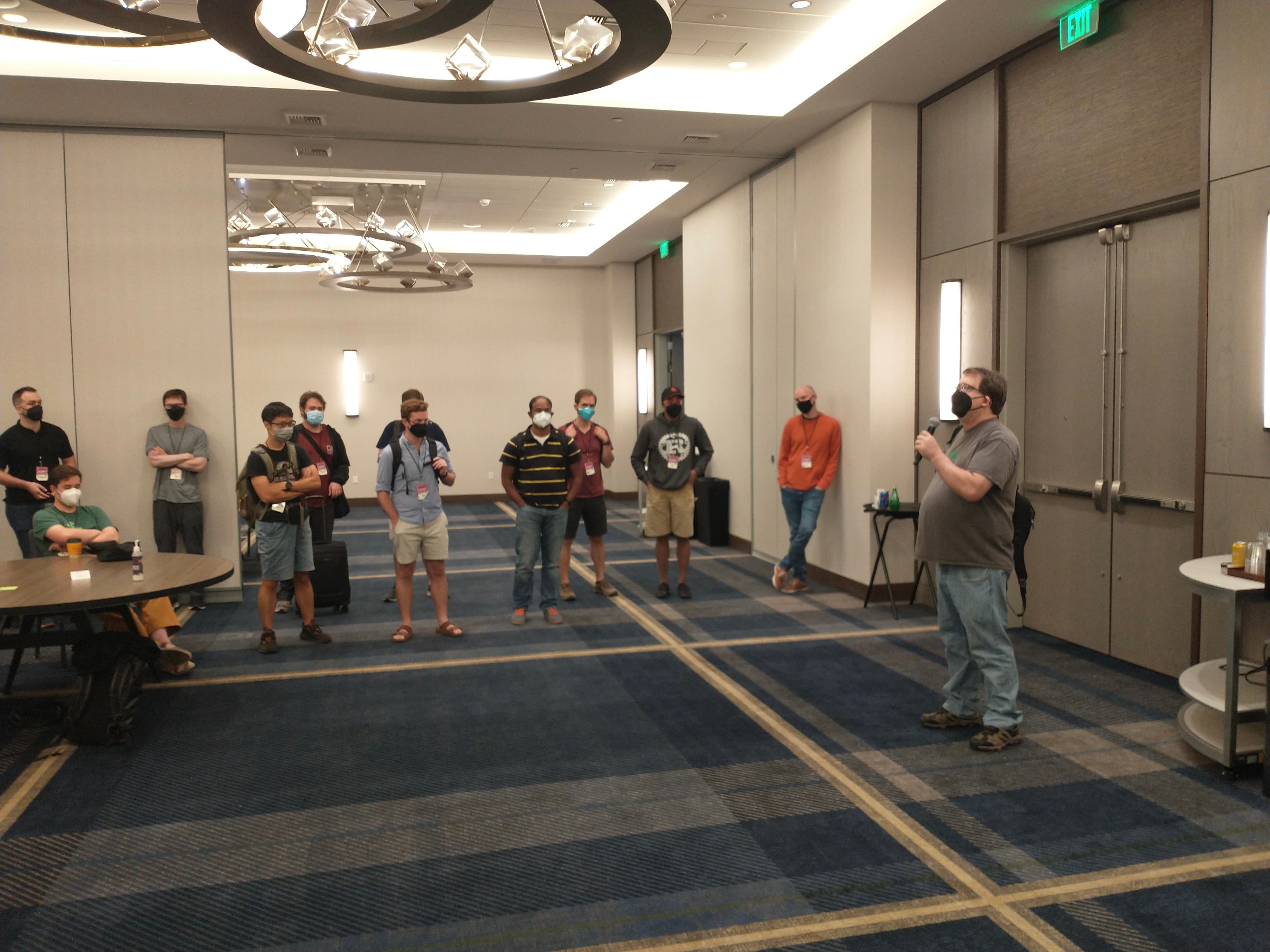 My time in Portland concluded with a dinner at Andina in downtown Portland with leaders from the Rust Edu organization. Rust Edu is an exciting effort spearheaded by Bart Massey of Portland State University, Will Crichton of Brown University and Cyrus Omar of the University of Michigan to promote the teaching of Rust in colleges and universities by developing a Rust curriculum and to improve the learnability of Rust. 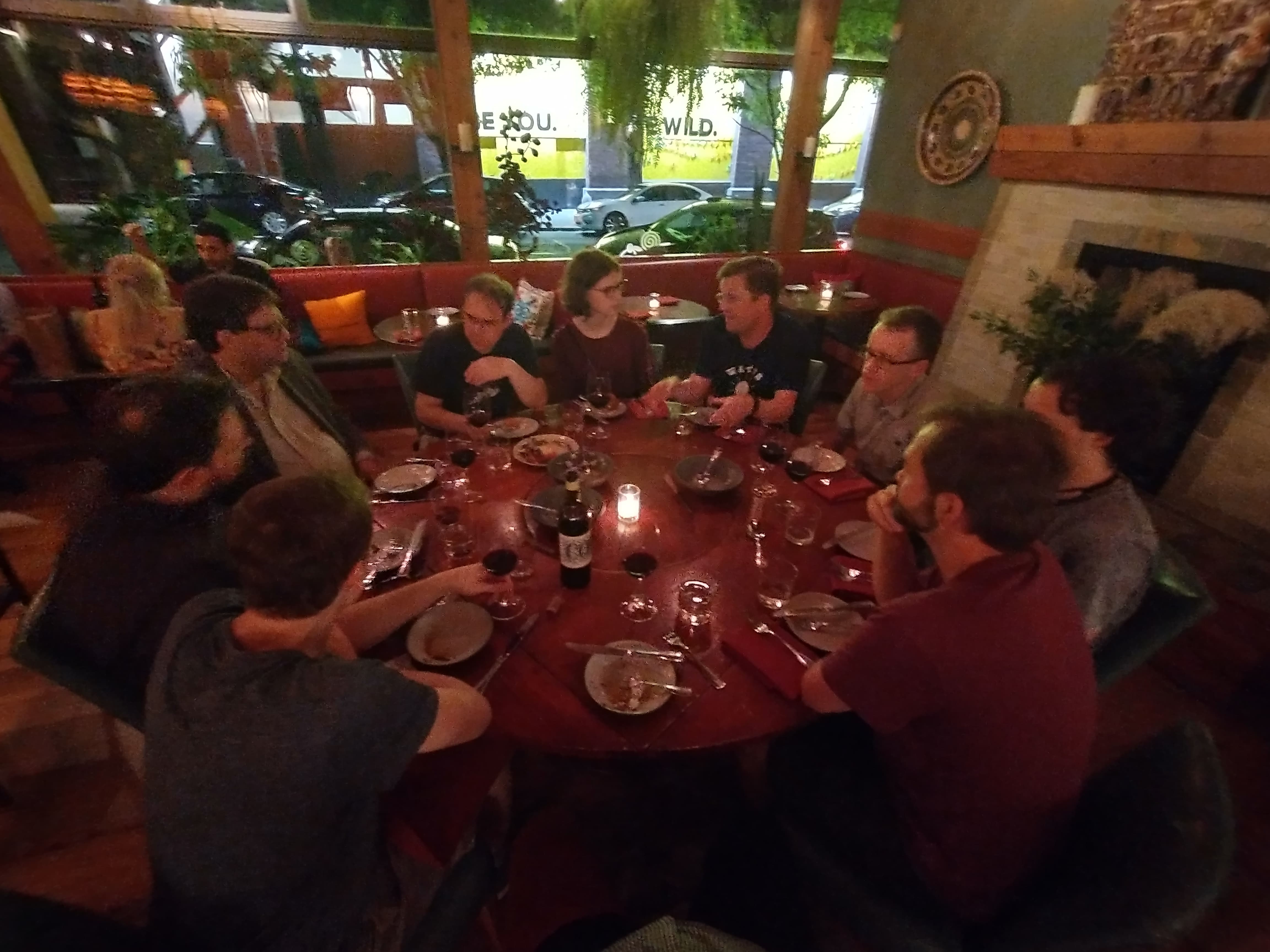 Dinner with leaders from the Rust Edu organization

It is always great to meet users of Rust and to catch up with colleagues and contributors from the Rust project, and RustConf was a great opportunity for both.